Amnesty International’s campaign to end violence against women and their report on the case of Albania strongly advocated for goverment intervention and reform. However, it appears that 13 years later the case in Albania has not changed, and in fact it has potentially grown worse.  A Violence Against Women and Girls National Population Survey, conducted by the UN Women, a UN organization dedicated to gender equality and the empowerment of women, was conducted in Albania in March of 2019. This survey sampled 3,443 households with women between the ages of 18-74.  According to the survey 52.9%, one in every two, Albanian women have experienced violence within their lifetime.  Additionally, 65.8% of the women who experienced violence in general had been subject to dating violence, and 47% were victims of intimate partner violence. What is even more interesting about this survey is how the women in Albania felt about violence in relation to their society.  The survey concluded that one in every two women in Albania felt that their community perceives intimate partner violence to be a matter that is private and does not call for intervention. Additionally, social norms in Albania have perpetuated an atmosphere in which women feel that tolerating violence in the home is necessary to maintain a family, 46.5% of women found this to be the norm in their communities. 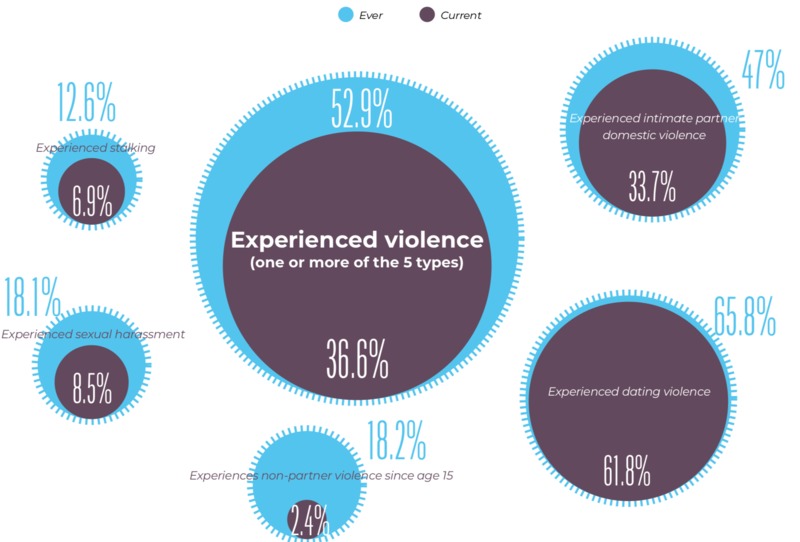 Statistics of Violence Experienced by Women and Girls in Albania

To understand exactly what is contributing to the high rate of violence against women in Albanian society, one can examine what kind of historical and cultural factors, if any, may be playing a role in the existing social norms. What may best fit to provide an explanation is The Code of Lekë Dukagjini (Kanuni I Lekë Dukagjinit), a renowned text of customary Albanian law which historically governed the daily lives and social behavior of the Alabanian people. The code of law outlined in this text is patriarchal to its core and perpetuates hypermasculine ideals, and validates them within society. It includes the definition of marriage, outlines the rights of men and women, as well as the duties of husbands and wives, and so on. In each instance of law outlined in the code, women remain inferior to men.

The Kanuni directly defines the woman as “a sack, made to endure.”  In addition to legitimately objectifying the woman, this law even consists of text that validates domestic violence in accordance with the theme of honor.  The Kanuni states that if a girl does not “submit and marry her fiancé” then she will be given to him through means of force, “together with a cartridge...” [a bullet].  Therefore if she attempts to escape the arrangement, “her husband may kill her with her parent’s cartridge, and the girl’s blood remains unavenged, because it was with their cartridge that she was killed.”  This is a code of law outlined under marriage in the Kanuni, it exemplifies how the Albanian woman lacked agency and was bound to her husband and family by all means, even to the extent where the murdering of her could be justified.  This customary law is in some ways foundational to Albanian culture, especially in the northern region. The ideals established by the Code of Lekë Dukagjini inherently play a factor in the patriarchal foundations of Albanian society, as for many years it influenced and validated social norms in Albania.  This traditional code of law directly outlines that the women of society are to be submissive, and that they are built to endure. As seen through evidence conducted by recent surveys and reports in Albania, many women in Albania today still feel that enduring and tolerating violence is something common to be expected.

excerpt from The Code of Leke Dukagjini

Despite every effort for intervention and reform, violence against women in Albania has continued to exist at alarmingly substantial rates.  Domestic violence has continued to be mishandled by not only the judiciary system in Albania, but by the society overall. The rates of violence against women are so great that they contribute to a concerningly high percentage of overall murders within Albania.  Course of action to combat this issue has been outlined clearly by advocates. Improvement in shelter, aid, healthcare, education, the justice system and police force involvement are the appropriate steps to stop the high rates of violence against women in Albania. However, it may not be simply Albania’s lack of implementation of reform to be the reason that the violence won’t end. Rather, it is important to consider why they are perhaps resisting reform.  The answer to this lies in examining the very strong cultural and traditional roots of the Albanian society that have essentially molded the social behavior and norms that continue to exist today.

Llubani, Megi. Mapping of Policies and Legislation on Violence Against Women and The Istanbul Convention in Albania. European Women's Lobby, [pdf]. https://www.womenlobby.org/IMG/pdf/ewl-albania_report_web.pdf