The Truth About Women and Addiction 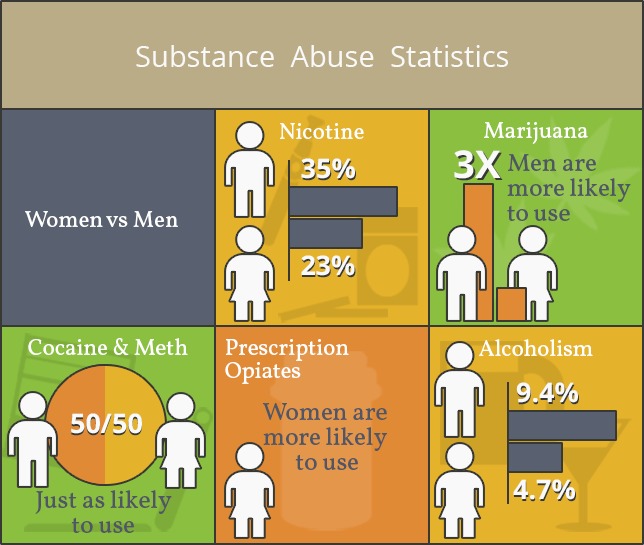 The study called Conference Report: Opioid and Nicotine Use, Dependence, and Recovery: Influences of Sex and Gender focuses on the research found from many different researchers on opioids and nicotine in relation to gender. This was a two day conference in collaboration with  the FDA, the Center for Drug Evaluation and Research (CDER) and the Center for Tobacco Products (CTP). It discusses how gender and sex have a great influence on how a person uses and recovers from opioid and nicotine addiction. There was a conference held about this topic where many professionals came to speak about these subjects and their findings.

The reason that this is a “cycle” is because you are expected to not use the drug again after going through abstinence/withdrawal, but when you relapse, it causes this vicious cycle of not being able to quit. According to US News, between 40 to 60 percent of people who've been treated for addiction or alcoholism relapse within a year (Castaneda). This shows how difficult it is to overcome addiction.

Why are females more prone to addiction to opioids and nicotine than men are? 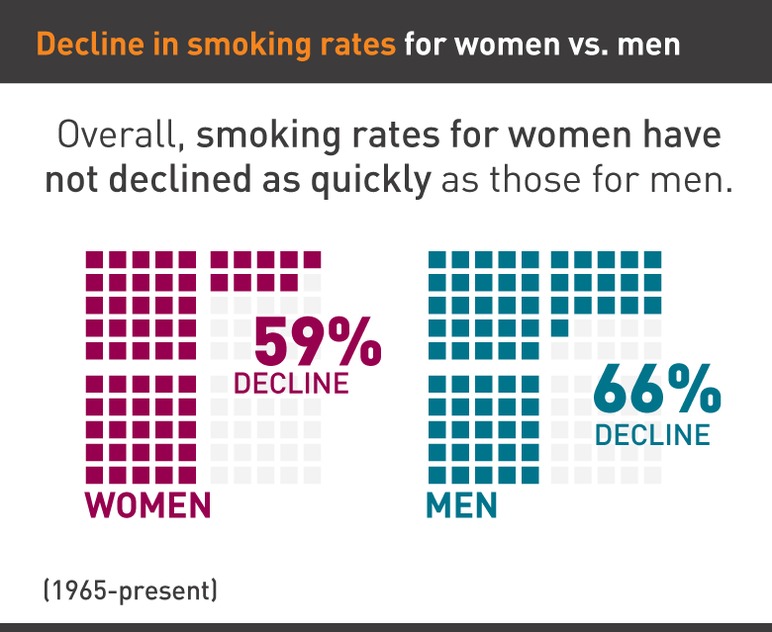 The main question is Why are females more prone to addiction to opioids and nicotine than men are? According to Sunrise House American Addiction Centers, women are more likely to abuse prescription opioids than men are and that  23 percent of women consume nicotine and 35 percent of men consume nicotine and it is done mostly through cigarette smoking(Editorial Staff). But, women are more fearful to quit the use of nicotine due to weight gain (Editorial Staff). This then causes women to be addicted to nicotine for longer periods of time than men because women are fearful of their physical appearances changing, which is something a lot of women do not want. Women are more prone to opioid addiction than men are because they tend to receive these prescriptions from doctors more often than men do. This is because “Women are more likely to receive prescriptions for opioids because they are more likely to suffer from chronic pain conditions such as fibromyalgia”(Harvard Health Publishing). From receiving these prescription opioids, when they are taken they tend to relieve the chronic pain that one is experiencing and then one gains a chemical dependence on it where they feel they need it desperately or their conditions will cause them more pain than ever before.

Why do women tend to abuse nicotine and opioids?

People tend to use nicotine because “they appreciate the psychoactive, stimulant effect of nicotine. Smokers report that smoking helps them concentrate, reason, and perform” These observations were consistent with studies demonstrating that nicotine improves attention, learning, reaction time, and problem solving (Crocq). People tend to use nicotine because they think it helps them to focus and better perform their daily activities. People tend to use opioids because they are prescribed it by a doctor to help relieve them of pain that they are experiencing. After using the prescribed opioids for a while, it then can turn into a habit of taking these opiods that spins out of control, either by taking more than your doctor prescribed or by using stronger opioids like heroin (APA). From taking this medication not as prescribed, you can easily become addicted to these opioids. Women tend to use nicotine because of low self esteem and peer pressure (World Health Organization). Even though more men abuse nicotine than women do, it is more difficult for women to quit because women experience stronger craving towards nicotine than men do because stress that women are experiencing and they are 31 percent less likely to quit successfully than men are because of this (NIDA). Women tend to abuse opioids because they want to control their weight, fight exhaustion, cope with pain, and attempt to self-treat mental health problems(NIDA). 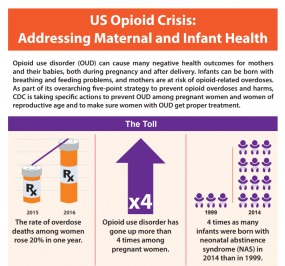 Photo Courtesy of Centers for Disease Control and Prevention

Why do women enter treatment sooner than men do? 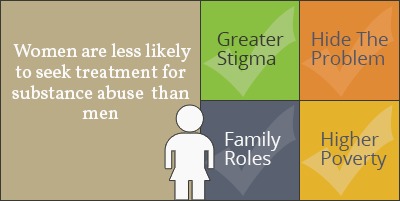 My findings for this was that many women actually try not to get treatment sooner because women are scared about the consequences of getting treatment. Some of these consequences are that they will lose custody of their children or go to jail and some are the worry of having to make arrangements for their children or work while they are in treatment. Women have a lot more social pressures than men do when it comes to getting treatment for their addiction(Editorial Staff). These social pressures are extremely difficult because as a mother, you are expected to always put your child first. By doing drugs and becoming addicted to them, no matter what the drug is, some may consider it as “putting yourself and your addiction over your child,” which is just not true. I have heard many people say this about women who admit that they have a problem with drugs and attempt to seek treatment. Stigmas like this are a large part as to why women tend to seek treatment sooner than men do. In addition, when a mother is seeking treatment for her addiction, she needs to have someone to care for her children while she is doing this. If you don’t have a great support system this can make it extremely difficult for a mother. 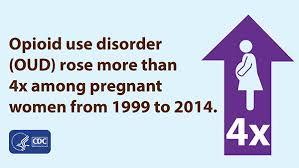 Photo Courtesy of Centers for Disease Control and Prevention 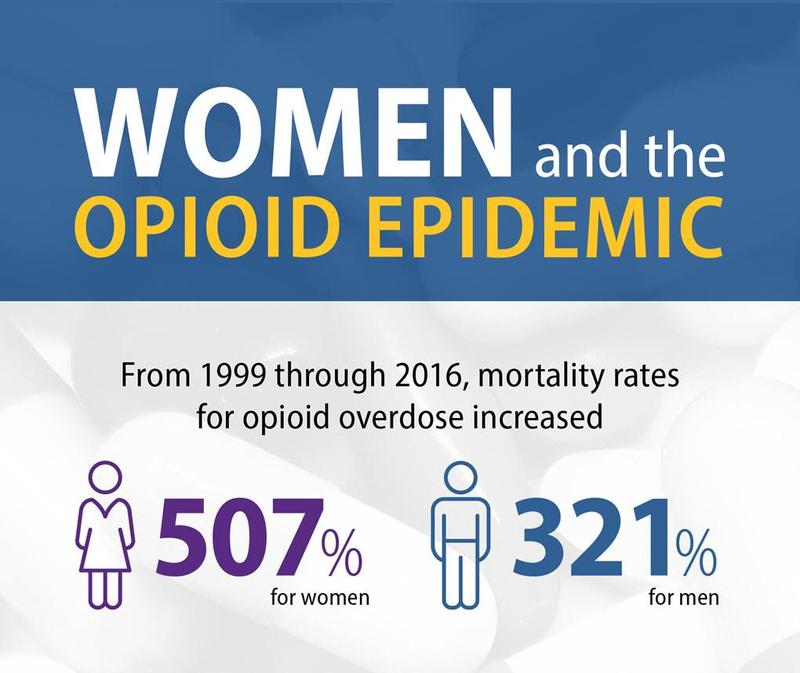 How does an opioid or nicotine addiction affect pregnant women? 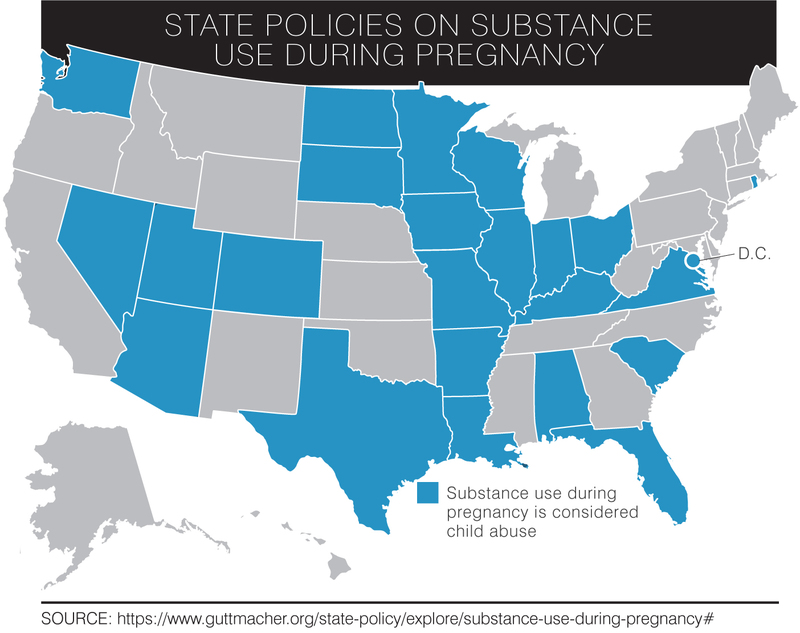 Nicotine addiction affects not only pregnant women, but their growing fetus as well. Nicotine addiction can cause preterm birth, low birth weight, and birth defects of the mouth and lips. Smoking during and after pregnancy also increases the risk of sudden infant death syndrome, also known as SIDS (CDC). Opioid addiction during pregnancy can cause preterm birth , stillbirth, maternal mortality, and neonatal absitnence syndrome, also known as NAS (CDC).

Photo Courtesy of Behavioral Health of the Palm Beaches

Females are more prone to addiction to opioids than males are because they are prescribed opioids more often by healthcare professionals because women tend to have more chronic pain than men do. Females are not more prone to addiction than males when it comes to nicotine but it is harder for females to quit because they are fearful of their physical appearance changing. Women tend to abuse nicotine not only because of its stimulant effects, but also due to stress and peer pressure. Women tend to abuse opioids because they are prescribed it by a doctor for a chronic condition and they then become dependent on it. Women do not enter treatment sooner than men do because they are worried about losing their children to the police for admitting to having a drug problem. Both
nicotine and opioid addictions during pregnancy not only affect the mother, but the fetus as well and can cause major problems to both.