Domestic violence is a prevalent issue in American society. Statistics show that 1 in 4 women will be victims of domestic violence or abuse in their lifetime (CDC). In regards to data within the Asian American community, 21 to 55 percent of Asian women reported being victims of physical or sexual violence by an intimate partner. A study shows in a 6 year period, 160 domestic violence cases resulted in 226 fatalities in in Asian families. The statistics here are alarming, and show that there is a epidemic of violence and in need for support services. However, when seeking for help, Asian American survivors face issues like language barrier, cultural differences, racial stereotypes and immigrant status. The mainstream social services don't necessary cater to the needs of Asian American community based on these factors. Therefore, the need to organize and maintain Asian and Asian American organizations that deal with domestic violence issues is necessary.

Why are domestic abuse survivors in the Asian and Asian American community not well served by mainstream organizations or support groups?

For example, for undocumented survivor, fear of jeopardizing legal status or the fear of the authorites finding out their undocumented status might prevent domestic violence survivors in seeking help. Documented survivor can still be reluctant to seek helpl for fear of influcing their status. Some female surviors also rely on their husband to spnsor their status. On top of that, immigrant status might also lead survivors to feel isolated and lack trust in authority figures like law enforcement.

Language barrier is one important setback for Asian survivors. Like Figure 1 indicates, 71% of the survivors survey have limited English proficiency.. Because of this, their experience in an organization that does not have translation/interpretation program in their native language can be discouraging and unhelpful, their stories may not be heard and law enforcement/social services might ignore the case entirely if they can’t understand the victims. This was evident in a case involving a woman named Li. Li’s husband has been beating her for eight years. One day he got mad at her because she ignored him when he tried to pick a fight with her. He started to hit her with a chair, therefore Li decided to defend herself with a knife. As her husband thrusted towards her, the knife injured him and Li prompty called the police. When confronted, Li’s husband asserted that Li attacked him first and used his rather well off English ability towards his advantage. Li’s English was not as good as her husband’s, meaning she could not defend herself in front of the police. The police, only getting one side of the story and not wanting to investigate further, decided to arrest Li instead as her husband was the only one who could provide testomony (Wang, 163).

The term “model minority” refers to a phenomenon where Asian Americans are viewed as having a very stable lifestyle; they do not seem to suffer from poverty, depression, a lack of education, and lead very stable work and home lives. Because of this stereotype, many stories about domestic abuse against members of the community may not be taken as seriously as someone else’s. The fact that the Asian American community is seen as having stable nuclear family households might be viewed as a positive reflection of a good cultural uobringing, but the label also hides other problems of exactly why this household is considered “stable” in the eyes of traditional Asian family values: for example, the need of a strong patriarchal leader that makes decisions for the family regardless of their consequences makes it so that female domestic victims are silenced in reporting a male’s possible violent behavior. The model minority label in general is seen as an obstacle for Asian female victims to report help because in society they are already labeled as having a pretty safe, comfortable environment to live in. 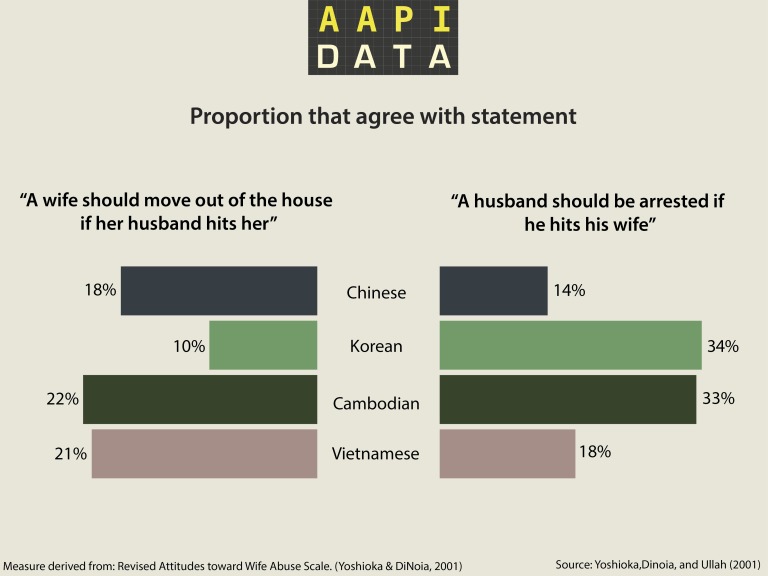 Domestic violence tends to be a stigma amongst the Asian American community. A research on sexual violence amongst Asian communities shows victims don’t disclose their experiences are due to fear of affecting their reputation (67%) and isolation from friends and society (37%). Christina from the video talked about continuing to share her story was very hard for her family because they viewed it as a disgrace.

As Figure 2 shown, only 14% to 34% Asian Americans surveyed agree with "A husband should be arrested if he hits his wife". Some cultural traditions might prevent survivors from recognizing the violence they experienced as a social problem. To try to save face, especially when it comes towards honoring their family name and not wanting to stain its reputation, victims will try to cover up the violence or even justify the violence being done against them as simply the way life has to be.

One example is of a Cambodian victim named Kim Seng, who was killed by her abusive husband. Kim's mother tried organizing a family meeting a week prior as a marriage intervention in order to try to get the beatings to stop. Her mother said that in the Cambodian community, people tend to focus more on keeping a stable foundation for the family rather than addressing issues affecting family members due to traditional morals (Wang, 168).

Another aspect of cultural differences is that Asian American survivors might feel isolated in organizations that offered help. For example, Win Ha, a Vietnamese survivor, was abused by her husband during her first month in America. She seeked for help at an advocacy group that her friend introduced to her, and was placed in a women’s shelter shortly after. However, she only stayed there for three days because there was no Vietnamese food and no one speaks Vietnamese at the shelter (Wang, 157).

What organizations, services and resources can the domestic violence survivor use that are specifically focus on helping the Asian and Asian Ameican community?

What strategies do they use to challenge the stigma around domestic violence amongst Asian American communities? 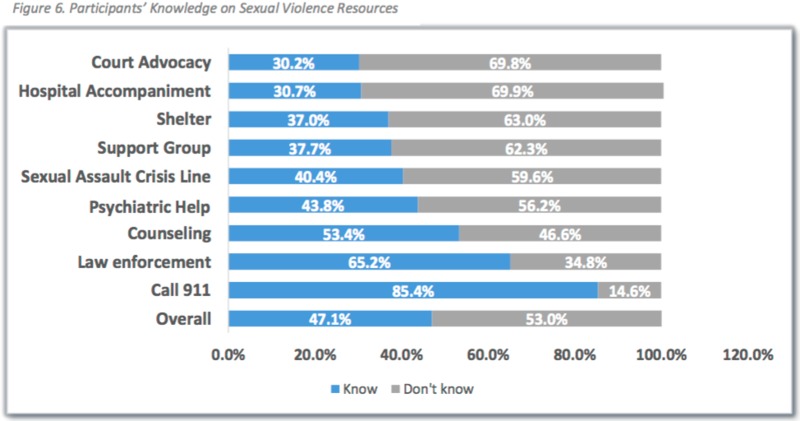 I have attempted to find many organizations that focus on Asian American domestic violence victim. In New York City, there is the Korean American Family Service Center and Rainbow House Shelter. In California, San Fransisco has the Asian Women’s Shelter while Los Angeles has the Center for the Pacific Asian Family. Finally, in Washington, there’s the Asian/Pacific Islander Domestic Violence Resource Project. They offer culturally and linguistically appropriate setting and address the specific needs of the survivors. However, I noticed that these organizations all appear to be in relatively big cities with a large Asian American population, which means people of a similar background are waiting and willing to help. 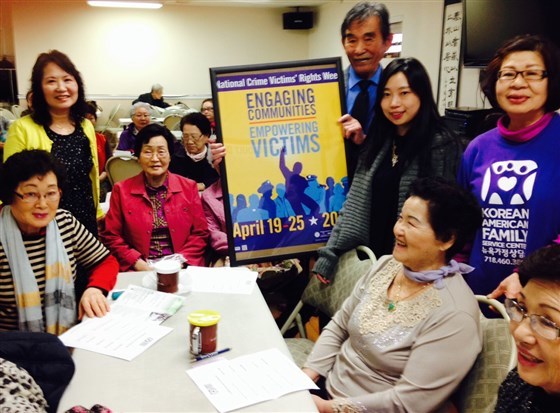 Community outreach is usually a big component for many of these organizations. As Figure 3 shown above, survivors' knowledge on different resources and support systems are somewhat limited. It means reaching out to the community and raise awareness is very important. The Korean American Family Service Center send out pamphlets and use Korean-language social media to make public service announcements. Rainbow House Shelter provide up to three months free housing. Asian Women Shelter participate in community fairs and marches to raise their visibility. They also distribute accessible educational materials.